Exploration for copper has been rewarded throughout this belt. MTV is poised for a new phase of discovery.

Let’s give this some thought…

Chile is the top copper producer in the world 1 with a historical track record of being the best spot to explore for copper in the world. It also boasts the top global copper reserves 1.

Chile’s popularity as a sophisticated mining region is tied to a number of factors that make it a positive and profitable environment for mining companies. On the resource side alone, Chile boasts large, high-quality copper reserves that are located in regions of the country supported by energy infrastructure, transportation networks and numerous capable providers of goods and services. The country is also rich in skilled labor and is home to mining specialists with deep knowledge of the industry.

Regulated by both domestic and international bodies, as an OECD country, Chile prides itself in having a long history of stable legal frameworks that support both the government and the resource companies. It is a highly respected, transparent jurisdiction and a top investment destination.

TVC is located in the productive Cretaceous belt of Chile that hosts a wide range of copper deposits.

On over 46,000 hectares of land, less than 10% of the property surface was thoroughly explored by Vale – TVC has had no exploration drilling since 2007. We believe this needs to change. Why?

For at least two reasons:

Looking at the map, these are depicted by red and green dots respectively. 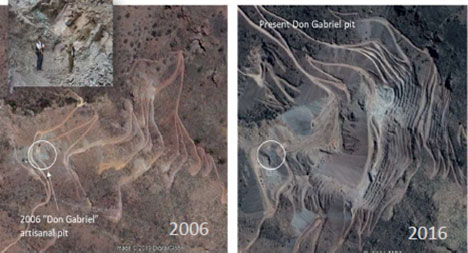 Without the artisanal mining, it is possible our deposits would not yet have been found. TVC takes advantage of intense artisanal mining activity in the district as privileged exposures of mineralized zones can be observed.

Detailed mapping and sampling of artisanal mines, together with traditional prospection methods, is a key tool for geological interpretation and ranking of targets.

Historically, similar mining districts have expanded their reserves several times over due to the tendency of manto-type deposits to cluster (up to tens of small-to-medium size orebodies). Our Cumbre and Don Gabriel orebodies were drilled based on preliminary modeling from mapping small pits.